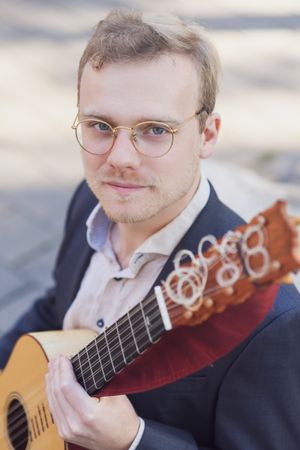 Jonathan is a specialist in period instruments of the lute and guitar family, with a background in classical and electric guitar. His performances offer "exciting and technically brilliant" (Marvin Dickau) displays of the wealth of the musical language, and are engaged in inspiring and educating audiences.

Versatile as a soloist, chamber musician and continuo player, Jonathan frequently distinguishes himself across Canada, the United States, and Europe. He is active in the rich early music scene throughout Canada, and can be seen performing music on period instruments, solo and with ensembles such as Aureas Voces (Halifax), Pacific Baroque Orchestra (Vancouver), Tafelmusik (Toronto), Cappella Intima (Hamilton), Theatre of Early Music, and in festivals and series including Music and Beyond, Festival Montréal Baroque, Musique Royale, and Hammer Baroque. In 2020 he gave a solo concert tour of British Columbia for Living Room Live, performing music for the baroque guitar. Jonathan is the lutenist in Duo Oriana, playing alongside soprano Sinéad White, who recorded their debut album 'How Like a Golden Dream' in October 2022 for release with the Leaf Music label in Spring 2023.

He has extensive experience in contemporary classical music, having premiered and performed large-scale works on classical, and electric guitar in series such as Live@CIRMMT and Montréal/Nouvel Musique. With the Cygnus Trio he has taken part in the commissioning and premiering of multiple compositions, all of which are recorded on their 2018 album ‘Amalgam’. He is also deeply interested in developing repertoire for historical instruments, which can be heard through his own compositions and in composer collaborations. In September 2020 he premiered Toronto based composer Arie Verheul van de Ven's piece "Mosquito Touch" for solo theorbo, accompanied by animations by visual artist Alex McLeod.

His classical guitar studies began in Penticton, British Columbia with Selwyn Redivo and he received a bachelor of music with a double major in guitar and lute performance at McGill’s Schulich School of Music, and was recognized for outstanding achievement in Lute. He studied with Jérôme Ducharme and Sylvain Bergeron. In 2020 Jonathan received a Master's in the Performance of Early Music at the Escola Superior de Musica de Catalunya in Barcelona, studying in the studio of Xavier Diaz-Latorre. His master’s research on historical stringings on the baroque guitar received the highest marks and is published in RECERCAT which archives research carried out at institutions in Catalunya.

Jonathan is also deeply passionate about caring for and protecting the natural world. He has worked as an educator for the Ontario Turtle Conservation Centre, and can always be heard supporting at-risk species on this Earth that he loves. If he's not practicing, or performing with instrument in hand, you'll often find him appreciating life outdoors.